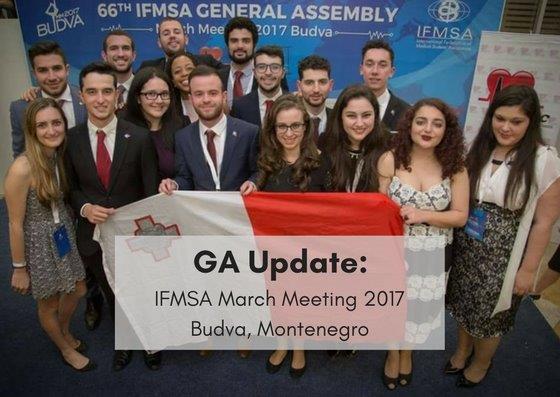 Between the 2nd and 8th of March, the MMSA was represented at the 66th IFMSA General Assembly (GA) March Meeting in Budva, Montenegro. The delegation consisted of:

The GA consisted mainly of Standing Committee Sessions; SCORP, SCOME, SCOPH, SCORA, SCOPE (Professional Exchanges) and SCORE (Research Exchanges). The delegates attending these sessions learnt here how to improve their work within the respective standing committees. Yvette and Ugonna were also involved in the sessions team of SCOME and SCORP respectively, where they were involved in the setting of the agenda and facilitating sessions.

Furthermore, some delegates attended NMO Management Sessions, where they developed skills such as Working with Externals, Communication within the Organisation, Policy, Financial Management and Strategic Planning.

The Head of Delegation and other delegates attended President Sessions, where they gave their input within the running of the IFMSA.

The MMSA also attended Regional Sessions, where European health issues such as Migrant's Health and Anti Microbial Resistance were discussed.

The theme of the GA was Organ Donation, and MMSA delegates attended Theme Event Sessions where they learn more and contribute towards this important topic.

Training sessions were also delivered at the GA, and MMSA delegates took the opportunity to deliver and attend training sessions. Ugonna, Jordy and Luke gave training sessions about 'Recruitment within your Organisation', 'Sexual Health in Mental Health Patients', 'Public Speaking' and 'Financing and Fundraising in Exchanges', while throughout the GA, MMSA delegates were trained in topics such as 'Feedback', 'Evaluation of Impact', 'Obtaining Support from Governments and Universities', 'Promotion of your Organisation', 'Closing the Immunisation Gap' and 'Bugchasing and Chemical Sex'.

MMSA Projects were also showcased during the GA. At the Rex Crossley Awards, Sara presented a SCORA Project called 'Manifesting SCORA', which placed in the Top 10 of all the applicants. At the Activities Fair, Yvette and Denise presented SCOME's 'Minima Medicamenta', while Nicholas and Matthew presented SCOPH's 'Public Health Education'. The Activities Fair also served as an opportunity to get to know more about projects from other countries.

Finally, the MMSA voted in the Plenaries, where Policy Papers were adopted, Memorandums of Understanding were accepted, and the new IFMSA Executive Board was elected.

All in all, it was a very productive and memorable March Meeting, and we shall publish a delegation report with all the details of what happened in the coming weeks.